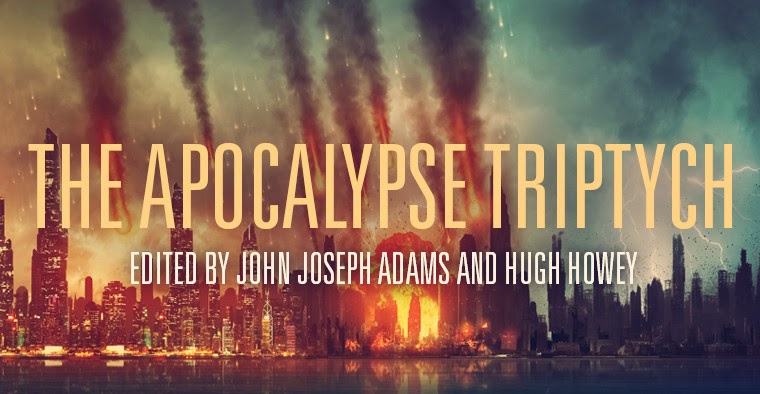 This is Book 40 started, book 35 finished

The End is Nigh edited by John Joseph Adams and Hugh Howey
Published by Broad Reach Publishing, March, 2014

I picked this book up as my March prime selection since I’ve read various collections edited by Adams in the past and I like Howey as an author.  In the end, I’m glad I did.

This is a collection of short stories about the apocalypse – about many different apocalypses – about just about every conceivable type of apocalypse out there.  There are religious based ones, pandemics, asteroids, nuclear wars, aliens, The Singularity, and everything else out there.

This book is the first in a trilogy – or a triptych – in which book one is set before the apocalypse, book two during and the final book in the aftermath.  Most authors committed to three short stories comprising an overall story arc across the three books.  So, then there are continuing stories to look forward to across the three books.

What I like about this collection is these aren’t the usual stories but are often skewed versions of the stories one would expect.  For example, “HEAVEN IS A PLACE ON PLANET X” by Desirina Boskovich is a story set in a world where humans wait to be teleported en masse to a far of heavenly planet by benevolent aliens before they destroy the earth.  There all dreams will be fulfilled.  Until then, no one is allowed to change their lives or behaviors in any way as they wait for the clock to count down – or they will be instantly vaporized.

“IN THE AIR” by Hugh Howey is a story of the world when the government decides it’s time to activate the nanotech seeded in most everyone on the planet to instantly win a war that hasn’t been declared yet.

“PRETTY SOON THE FOUR HORSEMEN ARE GOING TO COME RIDING THROUGH” by Nancy Kress addresses the next level of human evolution and how it first appears in today’s elementary school children.

"SPORES" by Seanan McGuire is the story of genetically modified fruit rushed to market.

The authors are a mix of new, upcoming authors and established ones.  The stories themselves were all highly entertaining and not the usual mix of decent stories with one or two really good ones that are often found in a short story anthology.   Instead, these are all really good stories with a few fantastic ones in the mix.  I thoroughly enjoyed this book and I will be reading the next two books as they are released.

Reading My Way Through Life

Even though a million people have done it before me, I've decided to record my thoughts on the various and sundry books I read over the weeks and months and eons to come.

These are my opinions on the books I feel like reading. I read so much to begin with that I thought I'd see what, if anything, happens if I start writing up my thoughts on the books.

I read a lot of Science Fiction and Fantasy but I also read a lot of other stuff depending on my mood. So who knows what all will pop up here.